His early life and his relationship with Dora Carrington were the inspiration for Gilbert Cannan’s novel Mendel. The characters of Loerke in D. H. Lawrence’s Women in Love and Gombauld in Aldous Huxley’s Crome Yellow were based on him.

In 1892 his parents took the family to his mother’s native city, Przemyśl, Austria-Hungary (now Poland), where they worked as innkeepers.Though Louis was popular with his customers, mainly Austrian soldiers, the inn was a failure. One night without telling anyone Louis simply left for America (ca. 1893) in search of work. He eventually sent word to Golda telling her that once he was settled she was to bring the children to live with him there. However, this venture also failed and his family never joined him in America.

Instead Louis returned to Britain, and had his family join him in London in 1896, when Marks’ forename was anglicised as ‘Mark’.
From an early age Gertler showed signs of a great talent for drawing. On leaving school in 1906, he enrolled in art classes at Regent Street Polytechnic. Unfortunately, due to his family’s poverty, he was forced to drop out after a year, and in December 1907 began working as an apprentice at Clayton & Bell, a stained glass company. He disliked his work there and rarely spoke of it in later years. While there he attended evening classes at the Polytechnic. In 1908 Gertler was placed third in a national art competition; this inspired him to apply for a scholarship from the Jewish Education Aid Society (JEAS) to resume his studies as an artist. The application was successful. Upon the advice of the prominent Jewish artist William Rothenstein, in 1908 he enrolled at the Slade School of Art, University College, London. During the four years he spent at the Slade, Gertler was a contemporary of Paul Nash, Edward Wadsworth, C.R.W. Nevinson, Stanley Spencer and Isaac Rosenberg, among others.

Gertler’s patron was Lady Ottoline Morrell, through whom he became acquainted with the Bloomsbury Group. She introduced him to Walter Sickert, the nominal leader of the Camden Town Group. Gertler was soon enjoying success as a painter of society portraits, but his temperamental manner and devotion to advancing his work according to his own vision led to increasing personal frustration and the alienation of potential sitters and buyers. As a result, he struggled frequently with poverty.

In 1914 the polymath art collector Edward Marsh became Gertler’s patron. The relationship between the two men proved a difficult one, as Gertler felt that the system of patronage and the circle in which he moved were in direct conflict with his sense of self. In 1916, as World War I dragged on, Gertler ended the relationship due to his pacifism and conscientious objection (Marsh was secretary to Winston Churchill and patron to some of the war poets). Gertler’s major painting, Merry-Go-Round, was created in the midst of the war years and was described by Lawrence as “the best modern picture I have seen” (Letters, 9 October 1916).

In 1913 Gertler met the author and poet Gilbert Cannan, who later described him as ‘a small passionate man with green eyes’. Cannan subsequently invited Mark to stay with him and his wife Mary at their Mill House in Cholesbury and the two men became good friends. Gertler lived there on and off during 1915–16, and painted Gilbert Cannan at his Mill, now on view in the Ashmolean Museum in Oxford. The picture depicts Cannan outside the Mill with his two dogs. The black and white one, Luath, had been the inspiration for the dog Nana in the stage production of J. M. Barrie’s Peter Pan. It was Cannan who was responsible for introducing Lady Ottoline Morrell to Gertler’s paintings and encouraging her to support his work. Cannan closely based the young Jewish character of his 1916 novel Mendel on Gertler’s early life including his infatuation and affair with fellow artist Dora Carrington. This relationship remained unfulfilled as Carrington spurned his numerous advances and instead declared her love for Lytton Strachey. The friendship of Cannan and Gertler waned after 1916, largely because of Cannan’s increasingly unstable behaviour.

Gertler’s later works developed a sometimes very harsh edge to them, influenced by his increasing ill health. In 1920 he was diagnosed with tuberculosis, which forced him to enter a sanatorium on a number of occasions during the twenties and thirties. Two of Gertler’s close friends, D. H. Lawrence and Katherine Mansfield, succumbed to the disease.

In 1930 Gertler married Marjorie Greatorex Hodgkinson, which resulted in the birth of a son, Luke Gertler, in 1932. The marriage was often difficult, punctuated by the frequent ill health of both, and with Gertler often suffering from the same feelings of constraint that destroyed his relationships with a number of friends and patrons.

During the 1930s he became a part-time teacher at the Westminster School of Art in order to supplement his intermittent income from painting.

Gertler gassed himself in his London studio in 1939, having attempted suicide on at least one occasion in 1936. He was suffering at the time from increasing financial difficulties, his wife had recently left him, he had held a critically derided exhibition at the Lefevre Gallery, he was still depressed over the death of his mother and Carrington’s own suicide (both in 1932), and he was filled with fear over the imminent world war. He was buried at Willesden Jewish Cemetery. 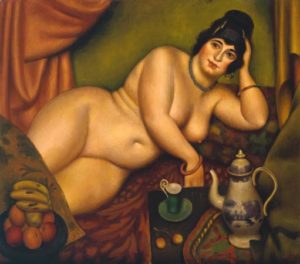 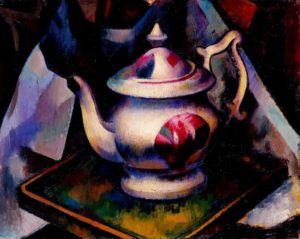 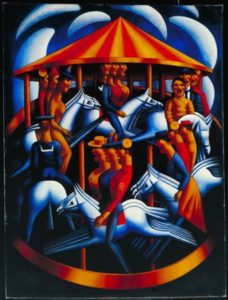 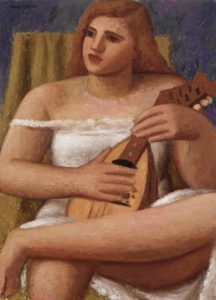 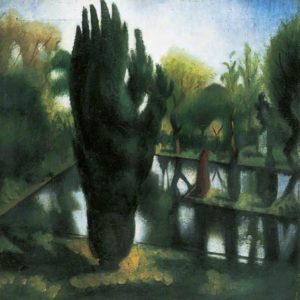 We use cookies to ensure that we give you the best experience on our website. If you continue to use this site we will assume that you are happy with it. Read More

PRIVACY POLICY
1. WHAT INFORMATION WE COLLECT
We do not collect any Personal Information about you from our Sites unless you choose to provide it to us. This means you can visit our Sites without telling us who you are or revealing any Personally Identifiable Information about yourself. As you browse the Sites, our Web servers do collect information about your visit, but not about you personally. None of the information about how you navigate the sites is combined with your personal identifiers.
2. HOW WE USE THE PERSONAL INFORMATION WE DO COLLECT
When you supply information about yourself for a specific purpose, we use such Personal Information for that purpose. For example, you may be asked to give us Personal Information to purchase a product or service, receive information, register for an account, or apply for a job.
3. NO MARKETING OF YOUR DATA
We do not sell or disclose Personally Identifiable Information obtained online about you to other people or non affiliated companies unless (a) you specifically authorize it; (b) it is to complete a transaction that you initiated; (c) it is required by law, (d) disclosure is necessary to protect the safety of customers, employees or property, or (e) required in order to service the company’s technical infrastructure.
4. CONFIDENTIALITY AND SECURITY OF YOUR INFORMATION
We apply high data security protections to safeguard your personal information. To protect the personal information we have about you, we use physical, electronic, and procedural safeguards that comply with federal regulations.
Futurismo.org by ACD Communication & Creation, Barañain, Navarra, SPAIN
phone: +34 948 960556

Our cookies policy
We use cookies for a wide range of purposes on our website and in our email communications to deliver our services and to improve your experience. We’re now also implementing a way for trusted partners to share those learnings, and enhance the experience on their website. This policy describes the categories of cookies that we use (and used by our partners), what they are used for, and how you can change your preferences.

What are “cookies”?
Cookies are small bites of information that are stored by your browser on your computer’s hard drive. Every time you revisit our website, your web browser sends these cookies back to us so that we can customise your experience to better match your interests and preferences, or to simply facilitate your signing in to use our services.

What cookies do we use?
The cookies we use allow us to recognise each returning consumer and their relevant information so that you do not need to input the same information more than once. They also help us to understand visitor traffic patterns through our website, so that we can enhance usability. Take a look at some of the types of cookies that are used across our website.

Essential Cookies
We may use essential cookies in order to enable you to receive the services that you request via our website. Without these cookies, services that you have asked for cannot be provided. For example, these cookies may be used to: – Remember previous actions you have taken (such as completing an online form) when navigating back to a page in the same session.
Performance cookies modules We may use performance cookies to collect information about how our website, advertisements and email communications are used and to flag to us if an error occurs. These cookies may be used to collect quite detailed technical information such as the last visited Page, the number of pages visited, whether or not email communications are opened, which parts of our website or email communication are clicked on and the length of time between clicks. While this information may be associated with details such as your IP address, domain or browser information, it is analysed only in aggregate with information from other users and not in a way that would directly identify you.
For example, these cookies may be used on our website to:
– Analyse and improve the performance and design of our website, advertisements and email communications
– Calculate the number of responses to our advertisements to improve the effectiveness of our advertising
– Measure errors presented on our website to improve our service and management complaints

Functional cookies
We may use functional cookies that are not essential but enable various helpful features on our website. For example, these cookies may be used on our website to:
– Remember the preferences that you selected on a previous visit to our website, such as, country/language, your interests and the presentation of our website (for instance, layout, font size, colours, etc), so you do not have to tell us again
– Remember answers to questions our website has asked you, such as, not wishing to take part in a customer satisfaction questionnaire, so that you are not asked again – Detect if a service has already been offered to you, such as, an offer of live online help
– Provide information to allow an optional service to function, such as, watching an online video or commenting on a blog

Firefox (Windows)
Select the Tools menu, and select Options
Then select the Privacy tab
Set Firefox will: to Use custom settings for history
Check mark Accept cookies from sites to enable Cookies, and uncheck it to disable them

Firefox (Mac OS X)
Select the Firefox menu, and select Preferences
Then select the Privacy tab
Set Firefox will: to Use custom settings for history
Check mark Accept cookies from sites to enable Cookies, and uncheck it to disable them